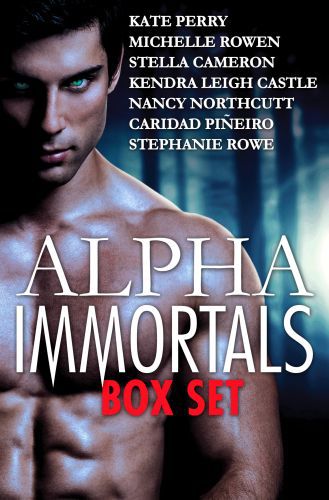 They're strong, seductive, and supernaturally sexy badboys. Now, in this special box set of seven sizzling novels, meet the hottest immortal beings in this world-or any other . . .
TEMPTED BY FATE by Kate Perry: Pursued by a relentless evil, Willow seeks help from San Francisco's most dangerous detective.
FANGED & FABULOUS by Michelle Rowen: Made into a vampire by the worst blind date ever, Sarah now finds her sizzling-hot, fanged friend Quinn trying to turn her self-defense lessons into make-out sessions.
DARKNESS BOUND by Stella Cameron: A werewolf who fights his animal nature, Niles prowls the woods to stop an ancient evil-and to find the woman who stirs his primeval lust.
DARK AWAKENING by Kendra Leigh Castle: Shapeshifting vampire Tynan is ordered to find a human Seer with the power to secure victory for his clan. But when he has Lily in his grasp, her touch awakens within him a hunger like he's never known.
RENEGADE by Nancy Northcott: Top sheriff Valeria must hunt down Griffin, a traitor trained in dark magic. But when the fugitive mage suddenly risks his life to save the beautiful cop, both will find themselves running for their lives.
THE LOST by Caridad Piïeiro: When paranormal enemies hunt Adam for his lethal gifts, he must escape with Bobbie, a sexy woman who makes him feel more human than he ever imagined.
SEX & THE IMMORTAL BAD BOY by Stephanie Rowe: Cursed by Satan, Paige will lose her soul unless she can convince shadow warrior Jed to sneak her past the pearly gates.