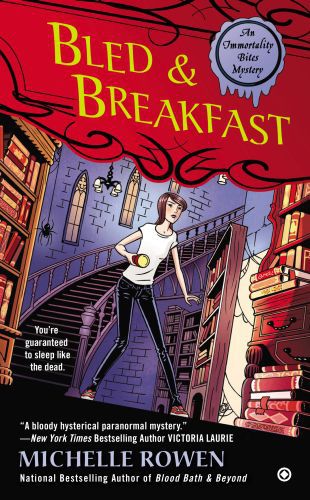 Fledgling vampire Sarah Dearly knew what she was getting into when she married master vampire Thierry de Bennicoeur. As an agent of the Ring, Thierry is sent all over the world to solve vampire crimes and keep them secret from humans. And now Sarah’s on the job with him--for better or worse.
;
Right after their wedding in Las Vegas, Sarah and Thierry get their next assignment: Three vampires have gone missing in Salem, Massachusetts, and they need to find out why. Their contact in Salem turns out to be a local lothario with a penchant for witches, but before he can help them, he suddenly goes up in smoke--leaving behind nothing but a stain on the ground and a seemingly impossible mystery.
;
Did a witchy ex-mistress cast a deadly spell, or is there something even more sinister happening to the vampires of Salem? Getting to the truth may require raising the undead, with a little help from the owners of a vampire-friendly bed and breakfast. But uncovering Salem’s darkest secrets may drag some of Thierry’s own past into the light.